Dr.Peters practiced for approximately 1 year in Vancouver before taking over the practice in Steveston in late 1990 . He has been at this location at 140-1200 1st ave. now for 30 years helping Richmonites with their health problems . Dr. Peters treats a wide range of neuromusculoskeletal conditions including special needs of the geriatric and pediatric age groups. With his back ground in sports he has been a valuable asset in maximizing the performance capacities of those athletes who seek his help.

Dr. Peters is an avid sport enthusiasts participating in hockey, skiing, running, wind surfing, weight lifting and other sports. He is also a master scuba diver trainer and has been involved with the dive industry for over 30 years.

Currently Dr. Peters is an active volunteer with the Rotary foundation and with other groups like the Musical therapy ride.

Stevestons longest practicing chiropractor with 30 years experience and over 300,000 treatments provided. Our mission is to provide timely, effective care to aid you in dealing with your health problems. 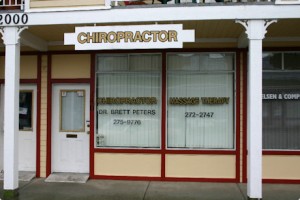 Whether your problem is an acute attack of back pain, sports injury, car accident, extremity problem or a chronic condition which requires a hands on approach to treatment, Chiropractic can often help.

As required by the Provincial Health Officer and the College of Chiropractors of BC, during the COVID-19 pandemic, chiropractors can only treat patients in-person when providing "emergent, urgent and/or essential care." You must schedule an appointment for in-person treatment. Unscheduled, drop-in treatment is not permitted.

Before you can schedule in-person treatment, you must be interviewed by Dr. Peters to confirm whether you require "emergent, urgent and/or essential care" and to assess your risk for COVID-19 infection.

Dr. Peters must interview you over the phone or using internet communications. You cannot be interviewed in person.